A Visitor's Perspective of Redwood 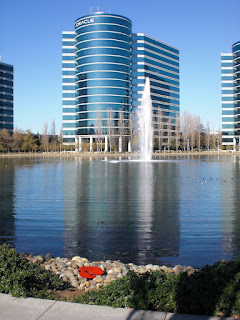 Stanley is not sure if he has been to Redwood before. He may have spent time there before being presented to his ACE parent, but if he did it may have simply been in a box. Either way he remembers nothing, so arriving in San Francisco on Martin Luther King Day he took the opportunity to visit Redwood, the Oracle Campus whilst it was quiet and he could look around without fear of recognition.

At first Stanley was in awe and simply layed back and looked up at the view. 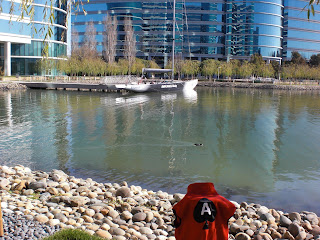 Then he spotted Larry's boat and thought wow! So Stanley walked around the pond. 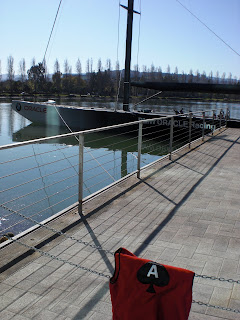 I heard somewhere Redwood used to be a Water Park with dolphins and shows etc.
Stanley went closer to see the boat clearer, it is difficult to see how impressive it is with the sailed rolled up but the height of the mast is about 6 or 7 stories high 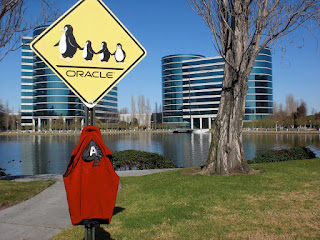 Not everything about Redwood impressed Stanley, for a start why do the penguins have a higher profile?
Posted by Debra Lilley at 3:07 PM No comments:

The problem with being so famous! 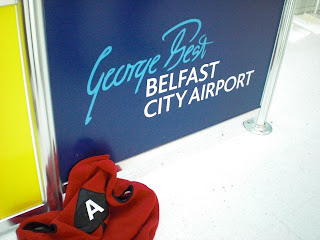 Like everyone Stanley had his own travel tales, and this is the story of the trip to San Francisco for the recent IOUC Summit. It all started in Belfast where Stanley had spent the holiday season with ACE Director Debra Lilley.

Originally a press call had been arranged at Belfast Security but on the day it was decided Stanley's celebrity status would send the wrong message, so press coverage here was kept to a minimum. In fact as you can see Stanley kept a 'low' profile. 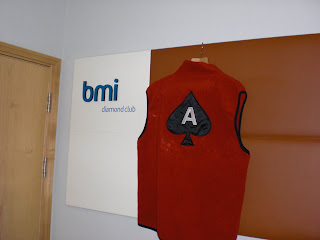 Stanley is new to travel and has yet to clock up enough miles for a decent frequent flyer rating but at Belfast his VIP status was recognised and he was invited into the lounge. Debra is a celebrity of her own in Belfast (I wish), so naturally both she and Stanley had an upgrade to London. 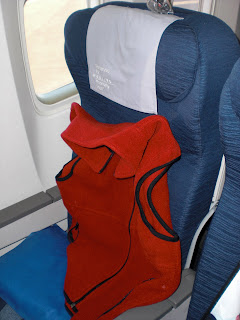 The next leg was to Chicago with United and they were lovely, giving the couple a upgrade to Premium Economy. VIPs are allowed on first so whilst it was quiet there was time for a quick photo shoot before everyone else boarded. Now I am not saying travelling with Stanley is the path to fame and fortune but at this point a Steward asked if they would like an upgrade to business class. A lie flat bed to Chicago, Debra and Stanley snuggled up for a great flight. 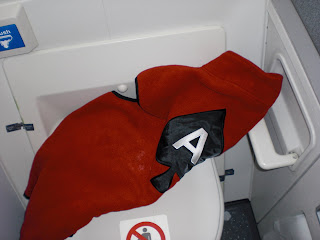 Sometime though a celebrity needs a Little time out and on a plane there is only one place you can be on your own.
Posted by Debra Lilley at 2:41 PM No comments:

UKOUG, the best User Group in the World 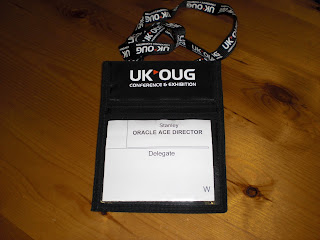 If you disagree with this statement then contact myself or Dan and we can ensure Stanley visits your conference and you can blog on his behalf.

Stanley came to UKOUG from Denmark, but as you will have read in the Miracle Birthday blog, he was not very sociable.

The ACE program had a dinner during the conference and this was hosted by Todd Trichler of OTN. There were about 20 ACE and ACE Directors at the conference. 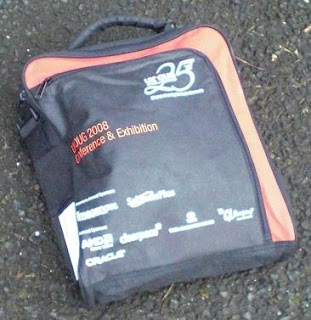 As with all delegates Stanley received his conference badge to the best conference and was given a delegate bag. Along with many conferences there was a desire to work with the environment and we have bio degradable bags. But better than recycling is reuse and so Stanley has made his bag his home and in future journeys this is how he will travel.
Posted by Debra Lilley at 11:09 AM No comments:

Most people I know find this blog very funny, but it has upset someone and I want to put the record straight.

Stanley is a vest, we love to hate. The ridicule of the vest is not in anyway reflective of how we feel about the ACE Program. I am immensely proud of being an ACE Director and would not want to compromise that in anyway.

There is no ridicule of the people who run the ACE program, I spent time with Lillian this week and in fact Stanley came to lunch with us. Nishit spent many hours teaching me how to use the ACE Director kit for FMW presentations, and in a later blog you will see that Stanley was there too.

If you find Stanley funny, comment on the blog and if you think I should stop also comment.
Posted by Debra Lilley at 11:01 AM No comments:

Back to Denmark, Miracle's 8th Birthday 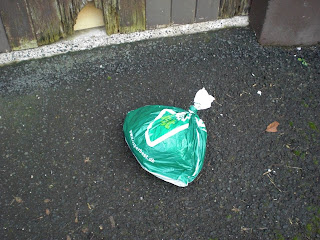 Again details are sketchy but when I received Stanley a few weeks later he was tied up inside 3 plastic bags, to ensure airport sniffer dogs did not become attracted at the airport.

All I can say is that whatever Stanley got up in Copenhagen, he let himself down and soiled himself (not literally, this was the result of a food fight and the passing of several weeks). 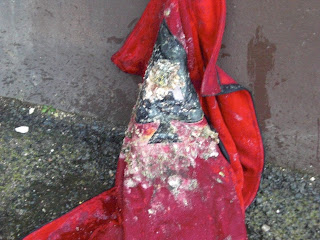 So again if you have details or even better photos, let me know.
Posted by Debra Lilley at 7:53 AM No comments:

What Happened in Finland? 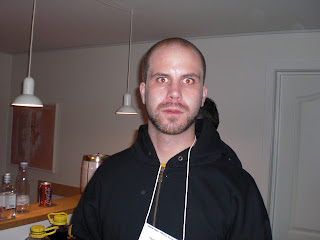 After Denmark Annti took Stanley to Finland, were details of his visit have been kept very quiet.

If you know the secret of the 'damp Petron box' and the further adventures of Stanley in Helsinki, let me know and I will add to the post.
Posted by Debra Lilley at 7:41 AM No comments: 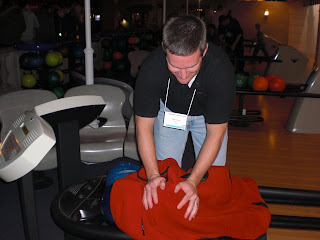 Stanley was originally presented to Dan Norris (ACE Directory Listing), but represents all the ACE program.

Dan bought his vest to Miracle Open World 2008 at Lilandia in Denmark and the first thoughts as we said was simply to extinguish life, but it was decided no we would make this more fun. We started with simple things like deciding is the high quality fleece fabric was good for dusting bowling balls but it all seemed too tame.

If you have never been to a Miracle Open World let James (seen in earlier blog christening Stanley), tell you all about it.

If you were at Lilandia and have any othere witty stories or even better photos please let me know and I will add to this blog.
Posted by Debra Lilley at 7:13 AM No comments:

If you love Stanley join his fan club on Facebook. It is just for fun
Posted by Debra Lilley at 6:49 AM No comments:

What do you do with Stanley? 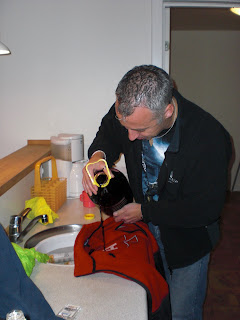 When we decided to to called the vest Stanley, he needed a christening. So in Denmark last year at Miracle Open World we did just that.

The pricture shows James Morle doing the honours with a special wine.
Posted by Debra Lilley at 6:14 AM No comments:

How did Stanley get Flat? 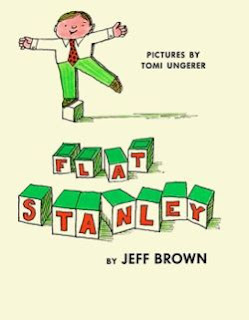 Stanley was named after 'Flat Stanley' a children's book character who is flattened by books but then as he can be put in an envelope travels the world sending back stories of his travels.

School children have adopted the story in what is known as the 'Flat Stanley Project'. The project was started in 1995 by Dale Hubert, a grade three schoolteacher in London, Ontario, Canada. It is meant to facilitate letter-writing by schoolchildren to each other as they document what Flat Stanley has done with them. Dale Hubert received the Prime Minister's Award for Teaching Excellence in 2001 for the Flat Stanley Project.

But this is not Stanley's best award, he is an Oracle ACE which is held in much higher esteem and a 'lovemark'. 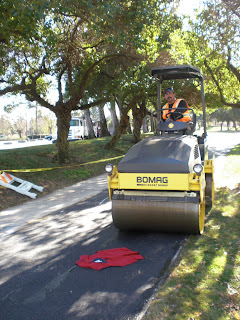 So having taken our vest (see the earlier blog entry) we needed to make sure he was really flat. But a picture doesn't tell the story watch the video, but as our great friend a fellow ACE Mogens says 'this is best viewed with your laptop stood on its side'.

Great video but even funnier story. At ODTUG last year I went on a photographic walk in New Orleans, the photographer said 'if you want to set up a photo, ask otherwise you will regret it', so walking past the steam roller I thought 'why not?' and walked back towards it. The driver stopped the engine and took off his headphones and asked if he could help. How do you explain what I wanted? I asked him if he knew Flat Stanley? and he replied "No ma'am, I am from out of town", so I told him it didn't really matter I had a vest (called Flat Stanley) I was photographing in silly situations and thought could I video him being run over with his steam roller, he replied (confused obviously), 'Yes Ma'am BUT he might get dirty!". I would love to have been at his house when he tried to explain to his family what he did at work!
Posted by Debra Lilley at 5:51 AM No comments:

In 2007, Oracle issued red fleece vests to all Oracle ACE program members. Unfortunately, they put a large ace of spades symbol on the back of the vests, creating the first known case of visual pollution in the world. The fashion police were summoned, but in San Francisco, such clothing is not only tolerated, it is encouraged.

However in 2008, having taken on board MOST of the comments new vests were issued that are more pleasing to the eye, just.

One recipient on the evening he received his new vest, ceremoniously destroyed the original vest during the dinner in San Francisco. It was soon decided that some other of the vests should die a similar death, and one such vest travelled to Denmark for his execution, but wait death would be a quick release and it deserved worse… 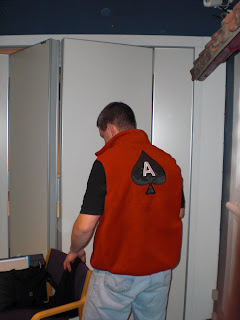 A small group of Oracle ACEs then took it upon themselves to make an example of the unfortunate clothing choice. He is named Stanley (after Flat Stanley ) and was baptized at Miracle Oracle Open World 2008 in Denmark and sent on a tour of the world to receive abuse in an international tour to raise fashion abuse and visual pollution. Hopefully, his lengthy cycle of abuse will serve as warning to future fashion designers.

A video of Stanley’s baptism and his fancy travel capsule will be posted here shortly. Stay tuned as we introduce more videos and pictures of Stanley’s travels around the globe.

Our Stanley is not really flat, and started his journey screwed up in a Petron Tequilia box. After leaving Lalandia in Denmark, he is now in Finland where he’ll meet Dan Morgan and Richard Foote in the care of Antti before returning to Denmark for Miracle’s 8th birthday party on Friday. Sure be a good kickoff to Stanley’s life of exciting travel and horrible “accidents.” More to come soon.
Posted by Debra Lilley at 5:43 AM No comments: