I love diving, my pockets give me buoyancy and yet when filled with weights I gently reach to the bottom. I have been diving with Dan and Mogens many times, and sometimes Debra comes to watch.

So you can imagine how excited I was when Dan said he would teach Debra to Dive. One day perhaps all 4 of us could dive together. 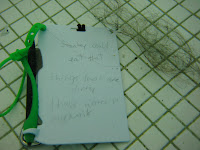 So yesterday Debra and Dan went off to the pool for her first go, and I was left behind, again. They left me behind but they didn't actually forget me, and even passed notes underwater to make sure I was included.

They think I don't know what went on, but remember I am Miracle Security so I know everything.
Posted by Debra Lilley at 11:28 AM No comments:

The IOUC Presidents Summit is one of those annual events I don't understand but enjoy. Last year it was all about Larry and the Sun but this year weather didn't really figure until we left.
They do have slides introducing everyone but I noticed they didn't have one for me so I have made my own now. 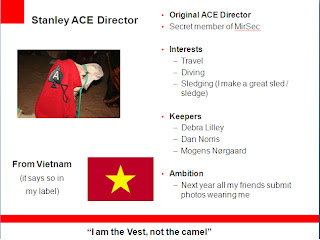 Lots of these people blog and I got a mention in some, Mike Reily ODTUG, and  Stephan Janssen from Belgium,  and I love this tweet from Stephan best - I love being famous.

Posted by Debra Lilley at 8:52 AM No comments:

Out With The Old and In With The New

Love San Francisco, all this free love and making friends. 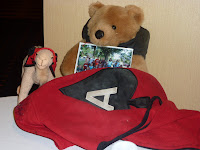 I told you I was here for the IOUC meeting and I brought Lille Stanley along for company, but then I spotted that bear Ujurak and I was cross, but I found out this is him going back to his owner and I don't ever have to see him again. To be fair, he is just a bear and nothing special at that, so I was polite and said goodbye nicely. 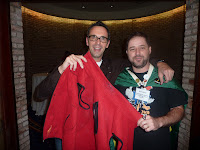 Then I went to introduce myself to Stephan, you remember the 'JUG' I met earlier. Well apparently he isn't a JUG, he is a JUG leader, (why does a container for liquid need a leader? I don't think I will ever understand these people). His real title is Java Champion, and he loved me, him and Bruno Souza, Bruno is from Brazil, and always wears the Brazilian Flag, (I told you I will never understand). They loved me. 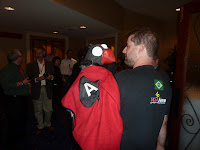 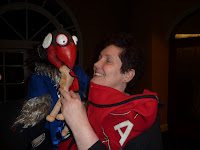 I explained I was the original ACE Director and the official mascot of the ACE Program, and they said they the Java Champions also have a mascot called Juggy. I thought it was going to be that pesky penguin, the one I attacked at Open World, but it wasn't, I am still not sure what Juggy is but I like him. We will be friends. I am not sure what will happen when keeper Mogens meet Juggy, he has a thing about Jugs but they may mean different things. 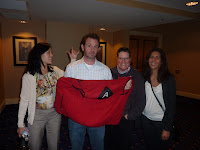 The I found out that Tory looks after these Java Champions for Justin just like Viki and Lillian looks after us ACE Directors, so I made more friends today, who all love me.

Every January I get to go to the IOUC. I love this, I meet lots of user group friends and they love me. I have felt a bit unloved recently so this is what I need.

What I love was the fact that Lillian, Justin and Viki came to visit me. That made me feel loved.

The sessions are normally lost on me so when they said there would be a session on best practice I was really pleased and I did learn some things:

1. The Latin America Group talked about the OTN Tour, and there was even a picture of me, except it wasn't it was Impostor Joe and I am annoyed and will be writing in his contract that as a stand in he can only appear in approved blogs and not to continue the fame elsewhere.

2. I want to join the South African Oracle User Group, they have a loyalty card which sounds great. I don't need many of the benefits like hotel and travel discounts, Debra sorts all that out, but they do have medical cover and I have needed that many a time.

3. Heli talked about EMEA Harmony and had a photo of me being shot with the bow and arrow, that pleased me because at least it was me on the stage.

4. Then Stephan Janssen ,who is a 'JUG?' he never mentioned me at all, and I thought had nothing to offer, he also didn't have his shirt on, he just wore a T shirt and it had one of those pesky penguins on it. Not impressed!

So I think I did pretty well today, and then later I tried to make friends with these JUGs but I will tell you about that later.
Posted by Debra Lilley at 9:54 PM No comments:

Undercover Mission To Rescue Me

I told you about my miserable Christmas and New Year, and I have just waited patiently for Debra to come and rescue me. 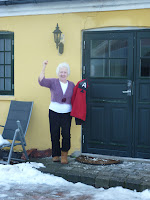 She was bringing her silversurfers over to Denmark to work on Mogens' Library and they are great friends of mine so I knew I would be rescued. Mogens met them at the airport, I heard him say to debra he would look after all the luggage and she called him a real gentleman (???), but then I realised that if she had seen into the trunk of the car she would have found me and Mogens didn't know that my friend Jakob had already told her.


Anyway the silversurfers Rita and Katie were very kind and brought me straight into the house for some love and warmth. really needed the warmth it is freezing here.

Rita was so pleased to see me she did a little Irish Jig on the front step. 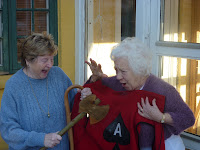 It has been a hard winter in Denmark and there is still lots of snow and ice. I showed the girls around the garden and Katie tried to chop off my head but Rita wouldn't let her. I love Rita, I need more friends like this or so  thought, what I didn't realise was that they were being taught by both Debra and Mogens that I am there to be abused and not a friend. I really should learn. 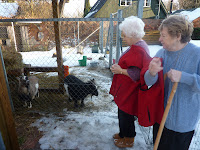 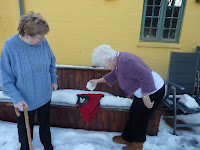 I took them to visit the goats, and then to the spa pool, which is when Rita showed her true colours and threw a snowball at me! 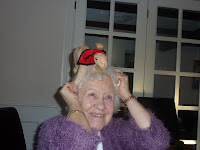 Inside I got to meet the new guy, mini Stanley, but I have been in Denmark sooooo long I know speak the language so I will call him Lille Stanley or Little Stanley from now on. And I have to admit I was a little jealous when Rita seemed more interested in him than me. But I have been rescued and tomorrow I start the journey back to N Ireland. I hope to see Jean the silversurfer who didn't make it across before I have my next trip to the US in a few weeks.

There were many celebrations in Copenhagen this weekend, which the world believe are due to the royal twins being born, but really they were for my rescue, but since it was undercover, the press were not allowed to say that.
Posted by Debra Lilley at 12:37 PM No comments:

How Did You Spend The Holidays

I tried to put a brave face on it, I posted my 'Getting Excited About Christmas' thoughts and hoped it would jog Mogens' memory that I was with him for Christmas and would quite like to celebrate the holiday. It didn't.

Why was I with Mogens if he can't be trusted? Well let's not be too unfair on the old man (he will be fifty this year), he is normally good and defiantly better than Dan but as he says 'WeDoNotUsePlanning and so there had to be spontaneity. Mogens was meant to be away for the holiday and so me being in his kit bag from after UKOUG meant I would be included, but his plans (no this sounds like an oxymoron) changed.

Debra on the other hand, plans, and so she talked to Mogens' understudy Jakob and tried to get me out for at least New Year, he failed to find me in time but today he did locate me in the trunk (boot) of Mogens' car, cast aside like an old rag. 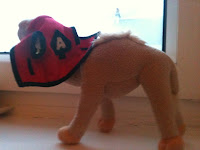 Normally I could take this kind of disappointment, I know my keepers love me really but it is a double whammy, Debra got a very special present from her sister at Christmas and it might displace me in her affections.  Her sister bought a Dubai camel souvenir and then hand crafted a 'mini me' so that Debra is not lonely when I am with another keeper. So she isn't missing me now.

But hopefully it is only for a few days, Debra is bringing her Silversurfers over for the weekend and then I get to go home again with her. Just a few more days in this freezing hell hole, do you know the average temperature her has been -10C all holiday.
Posted by Debra Lilley at 2:20 PM No comments: