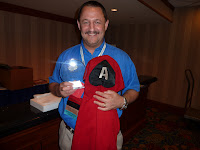 ODTUG is great and their president is Mike Riley. Debra and Mike have a special bond from 'The elevator incident'. Anyone who knows that thought Debra had had her 15 minutes of fame, but then I came along and have given her much more exposure than that pathetic incident.
Anyway very important for Mike he got his ACE credentials at ODTUG, congratulations. 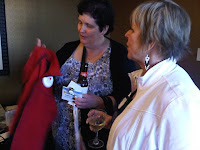 At ODTUG Mike is kept in check by Kathleen, who keeps a very tight ship and ensure everything is fine, including making sure I am registered.
But as the conference got going he was joined by his wife and First lady Lisa and their children Cameron, 10 and Morgan is 8.
I love children, they don't really understand why I am famous but they love me anyway. The best children are those of my ACE friends. The children think their parents are completely nutty and I like it that way. 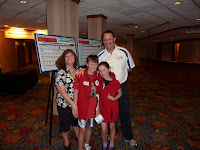 You can see both the children are wearing red vests. This is not the return of Joe the Impostor, this is another red vest, yet to be named, but that deserves a post of its own......


Finally I want to say thank you to Cameron who gave Debra his copy of 'Flat Stanley' and her you can see her reading it to us. 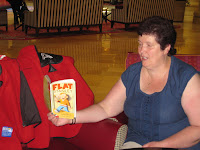 Posted by Debra Lilley at 1:53 PM No comments:

ACE Director Briefing - So Many Friends 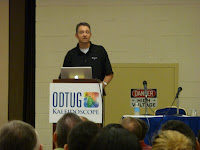 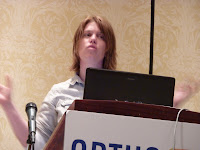 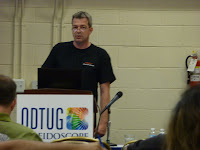 I love ACE Director Briefings - I have absolutely no idea what they are talking about (and Debra thinks she is non technical); but they are all my friends.

Here are just a few of them doing what it is all about. Presenting. Debra does this occasionally and I don't understand her either.  First is my great friend Cary Millsap who needs no introduction, but I was disappointed he didn't bring Alex.


Then we have Lonneke Dikmans who talks about SOA and Debra says this is something to do with Fusion which is what Debra talks about. No doubt they understand, but then that is why they are ACE Directors.


And here is Marco Gralike and this ODTUG was very special for Marco as it was here that he learnt he had been awarded his ACE Director status. Another new ACE Director is Joze Senegacnik who was not at ODTUG but did appear in one of my recent blogs. I love Joze and am very pleased for both him and Marco.

Lonneke and Marco are both from Holland which I will talk about in a later post.
Posted by Debra Lilley at 1:17 PM No comments:

Stanley at the Zoo 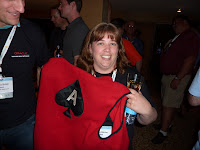 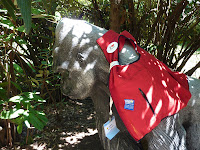 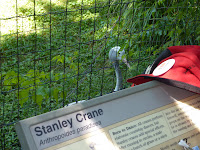 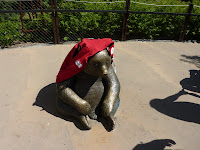 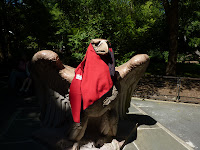 Washington has a great zoo and it is free and just a few hundred metres from the ODTUG hotel, so I was very excited to go. I went with Michelle Malcher another of my ACE friends from IOUG, and bringing up the rear was Debra.


It was a very hot day so no one wanted to wear me but I did get close to some of the animals as you can see from these great photos.


I liked the gorilla, some times I feel like a cheeky monkey and a lot of my friends fit the description.


The day before my friend Marco had been to the zoo and he told Debra there was a Crane called Stanley and sent her a photo to prove it. So obviously I had to check him out. It took a lot of coercion from Debra and Michelle to get me, the crane and the name plate in a photo, but I just used my charm on the bird ad over she came.


The highlight of the zoo is the pandas but the girls would not let me get into the panda area, never mind this one stood still long enough for me to have my photo taken.

And finally as this was America I had to have my photo taken with an American Eagle.


I loved the zoo, and my new friends. In fact I was a little jealous, they don't have to do anything, they get fed and people come to see them. I  have to visit my fans.
Posted by Debra Lilley at 1:00 PM 1 comment:

Mogens has Dinner With The SilverSurfers 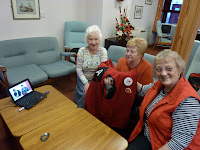 I have fans everywhere, of all ages, but some of my most loyal fans are the 'SilverSurfers'; these are 3 old ladies who live in sheltered accomodation in Northern Ireland who Debra 'teaches' IT to. They love me. Anyway, they got me an entry in Debra's private (not even Oracle) blog.

In this photo you can see Rita, Katie and Jean admiring me during one of the classes. If you look carefully at the laptop they are watching the Stanley documentary that my keepers Debra & Mogens made about me. They are actually watching on a laptop becuase the centre PC is blocked from watching videos as pornography is apparently a problem in the older population.

Anyway, there was then a conversation about how such a small laptop could allow them to do more than their normal PC and Debra, ever the technical genius, showed them that she could do all this on her iPhone. We even sent Mogens an email and he replied immediatley. Like all women they are under his charm and yet they had never met him. I suggested we did a Skype session, as they had recently learnt how to do that (very funny to see them skyping each other from different corners of the room). Mogens replied WeDoNotUseSkypeWhenWeCanVisitInPerson. First thing this tells us is that Mogens doesnt have Skype loaded on his PC (he is not as technical as Debra apparently).

So the following weeks lesson was TripIT so they could see that Mogens true to his word had planned a trip to come and visit them. Three very excited ladies, although a few weeks later Katie had to make the difficult decision to take a holiday instead of meeting the Great Dane.


Each week when I visited them they would check he was still coming. Anticipation was high and they were very excited. Mogens suggested he would take them and ME to dinner (and Debra could come as well if she wanted). At first they said no, it was OK for him to pop in for tea but going to dinner was a bit much. They obviously don't know Mogens, he promptly recorded a video for them saying if they didn't meet him at the airport and then have dinner with him, he would recreate his naked video in their home. Not surprisingly they gave in. 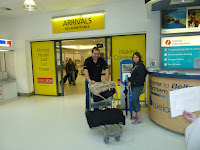 Eventually the day came and Debra arrived about 20 minutes early but they were ready and off we all went to the airport. Debra had made them a sign with his name on it which they held up proudly as people started to come through from arrivals. Mogens, ever the master of suspense, was last. But so pleased to see them he didn't even ask about me.

Then after the introductions it was off for dinner. Debra hadn't told Mogens where we we were going but the girls knew what she was up to and had to try hard not to give the game away. 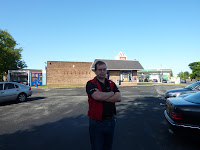 Did you know Mogens writes for the UKOUG Oracle Scene Magazine. It also won't be a surprise that when the article is published he makes a video to go with it. In the latest article he starts by explaining how he feels about KFC.

So Debra drove into a KFC car park, and as you can see he was not too impressed, and although she managed to get me in the photo, this is as close as he would get to the actual restaurant. 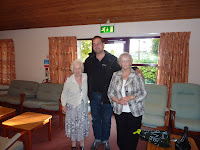 Actually she took us to a lovely restaurant in Carrickfergus by the coast and we had a lovely meal, well Mogens and the Silversurfers did, I don't eat a lot. After the meal we had a Maud's ice cream on the way home.

Mogens went into the home to see where they live and learn IT. You can't see it in this photo but can in the first one , there are a few wooden posts in the room to support the ceiling, and ever Mogens, he asked if they danced around it. 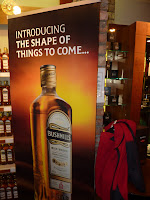 I love having my keepers around, and I keep on saying it is mostly just 3 out 4, I wish Dan could have been there as well. Mogens stayed a few days and toured around a lot of this country I call home. He wanted to do a tour of Belfast to see what 'The Troubles' were all about and was quite intrigued by all the preparations for the Twelfth.

We went to many different places but my favourite (and definatley Mogens') was the Bushmills Distilery.

I am so glad Mogens made friends with the Silversurfers, I am not sure he would have come just to visit me.
Posted by Debra Lilley at 11:11 AM No comments: 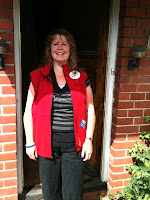 On Facebook I have many friends and some of them I have never even met, one is Julie who is a friend of Debra's from before her daughter was born. Debra hadn't seen her for almost 10 years but they keep in touch via Facebook and chat so all is good.

Julie has followed me since the beginning and she has Stanley stickers and fridge magnets in her house, she is great. In fact when they first knew each other there were three of them and the other was Cindy another Stanley fan who I met in New Zealand last year. See I reunite groups of people. 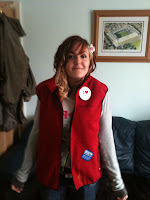 So a few weeks ago I got to meet Julie in the flesh and she got to meet me in the fleece. She has a daughter Leonie who is a bit older than Brooke and she too has now been converted. 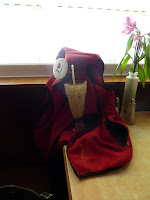 They live by the sea so it was off to the beach. First we stopped for a coffee which I always love. Quite often I get them thrown over me so it was great to have my own straw and a chance to enjoy it at my own pace. 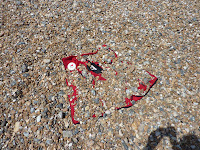 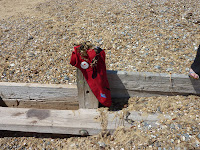 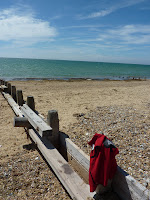 Then it was off to see the sea, Worthing is a pebble beach and it was fun I loved hanging out like an old sea dog and I owe it to my fans to get out there and party with them.

But then Debra thought I was having too nice a time and she and Julie decided to bury me alive. Luckily I am a resilient vest and I was able to rise from the depths. 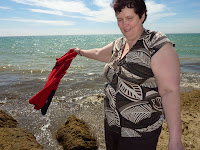 I thought everything was going to be OK then but Debra threatened to throw me into the sea, so I had to be very quiet and promise to behave
Posted by Debra Lilley at 8:52 AM No comments: